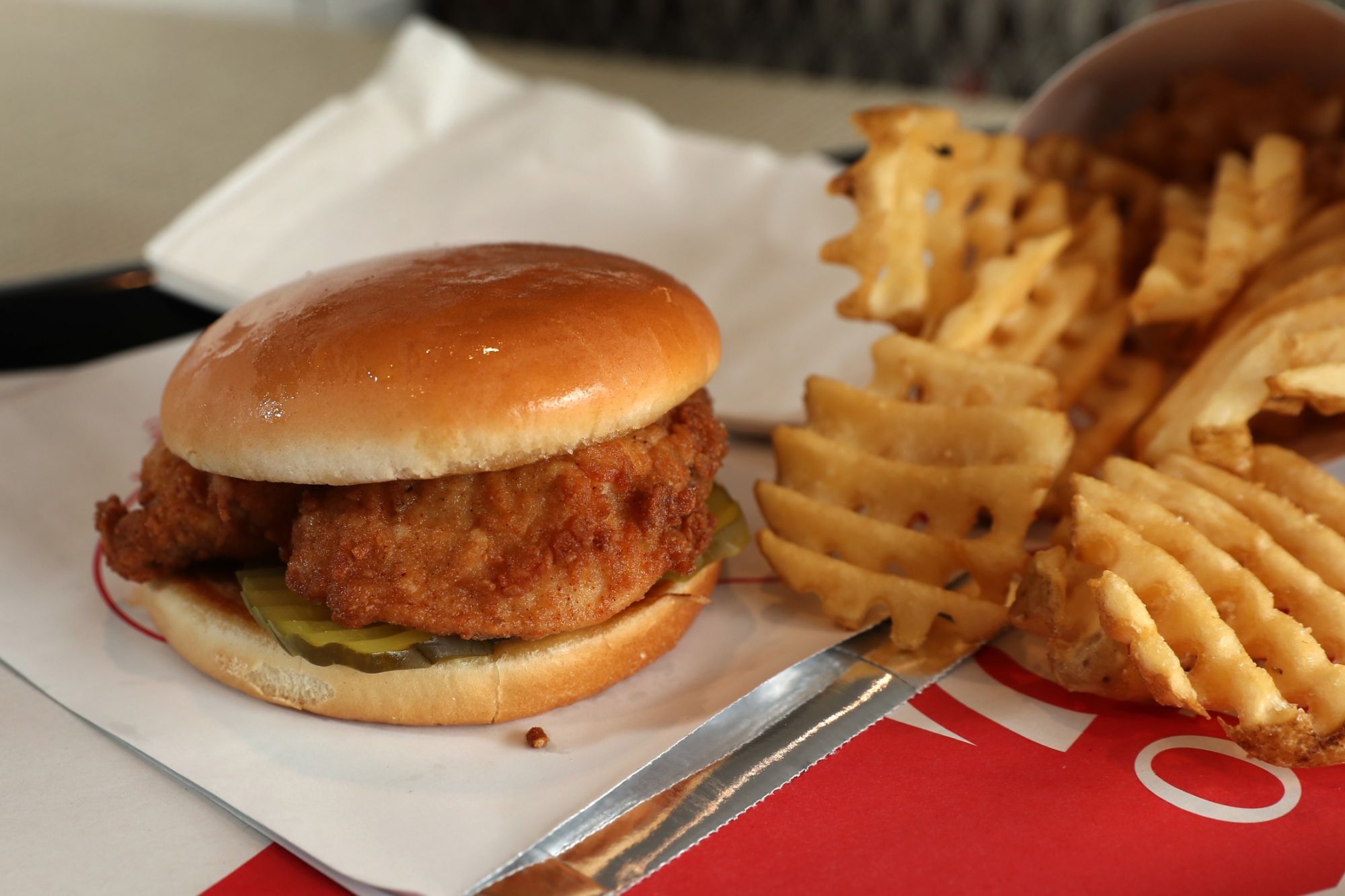 Check out how to get free lunch (yes, it does exist) at Chick-fil-A today, and at other restaurants throughout the year.

If you thought free meals were a perk enjoyed only by inmates, think again. Across America, on any given day, restaurants, cafes, fast-food chains, ice cream shops — even your neighbors — are serving up all kinds of yummy freebies. And it’s yours for the taking. Here’s a sampling of where and when to get free food in America.

This July 9, on Chick-fil-A’s 15th Annual Cow Appreciation Day, if you dress like a cow and visit any Chick-fil-A restaurant, you will receive a free entree. It’s an udderly crazy idea, right? But also brilliant. In 2017, more than 1.8 million people participated at more than 2,200 Chick-fil-A restaurants. It’s a day, Chick-fil-A says, for the chain to show their appreciation for their customers, while also honoring their iconic “Eat Mor Chikin” cows. Technically, you can wear any sort of cow apparel to qualify, from cow ears to a cowbell to homemade white T-shirts with black cow spots colored in. It all works.

This is an easy one. July 11 is always 7-Eleven Day! And that means free 12-oz. Slurpees (while supplies last) to all Slurpee lovers between 11 a.m. and 7 p.m. Choose your flavor — blue raspberry, pina colada, wild cherry. It’s all good. The freebies sometimes extend beyond Slurpees to include ice cream and Big Gulps, but check with your local 7-Eleven for details.

John Adams, William Henry Harrison and Harry S. Truman were farmers who went on to become U.S. presidents. But it was the commander in chief who once earned a living as an actor (Ronald Reagan) that designated the third “sundae” in July as National Ice Cream Day. Anyway, this year, we’ll all scream for free ice cream on Sunday, July 21. Typically, Cold Stone Creamery, Baskin-Robbins, Carvel — the Murderer’s Row of frozen dairy desserts — and other shops have refreshing free treats ready for customers. Last year, Baskin-Robbins offered discounts on cones, shakes and sundaes to folks who downloaded their mobile app. Dippin’ Dots, meanwhile, dropped free mini cups on customers for two hours. Follow your favorite creamery on social media for this year’s special offerings as July 21 approaches.

Naturally, your friendly neighborhood A&W restaurant — 100 years old this year — is the place to be this Aug. 6 for the 7th Annual National Root Beer Float Day. Many things in our culture have changed over the last century, but A&W still makes root beer fresh in their restaurants from real cane sugar, water and a proprietary blend of herbs, bark and spices. Back in February, however, A&W was forced to drop the ampersand from their logo because the “&” doesn’t work in URLs or in hashtags. Thankfully, you can still get yourself a free, small root beer float (no purchase necessary) this Aug. 6 in all participating A&Ws from 2 p.m. to 8 p.m.

Related: 5 Things You Need to Know Before Investing in a Chick-fil-A Franchise

Easily overlooked — we’ll bet you didn’t even consider Halloween a free food day, right? — this is definitely the biggest day of the year in which to pocket edibles without paying for them. Luckily, more than 75 percent of Americans buy candy to participate in traditional Halloween activities most years, according to the National Confectioners Association, which is the trade organization that advances, protects and promotes chocolate, candy, gum and mints, and the companies that make them. Even better, 72 percent of parents also admit they dip into their children’s Halloween bags when the trick-or-treating is all done. National Retail Federation stats suggested that Americans were ready to spend just under $3 billion on candy last Halloween. What’s the most popular Halloween treat nationwide? Apples! Just kidding, it’s chocolate.

Who does pancakes better than IHOB, the International House of Burgers? IHOP — the International House of Pancakes — does, of course. IHOP restaurants began National Pancake Day in 2006 so that moms, dads, kids and lumberjacks everywhere could enjoy a free short stack of original buttermilk pancakes on one syrupy day in March. (The actual date changes annually.) The flapjacks are free, but customers are encouraged to make a donation to one of the pancake shop’s charity partners during this fundraising event. The exact date has not yet be announced, so keep your eyes peeled.

Participating Ben & Jerry’s Scoop Shops have been giving away free ice cream cups and cones on the second Tuesday in April since 1979.

April 15 doesn’t have to be a stomach-churning event. Yeah, your return may be small — hey, it could be worse, imagine actually owing the IRS money! — but don’t fret. Hardee’s gave away sausage biscuits in the morning last April 15; customers at California Tortilla who mentioned the “1040” tax form received a complimentary order of chips and queso; Arby’s customers who signed up for their email list earned a signature sandwich or any gyro — gratis! Other eateries, such as Applebee’s, Boston Market, Firehouse Subs, Hooters, Cicis and Great American Cookies, all offer weary taxpayers free food or big discounts every April 15. Are you excited for Tax Day 2020 yet? Maybe next year you can file for an extension; that will give you more time to enjoy the freebies without distraction.

Related: 25 Interesting Facts You Should Know About Chick-fil-A

Mother’s Day is the busiest dining-out day of the year, according to the National Restaurant Association. Though finding an open table isn’t easy, when you eventually do, downloading a restaurant’s app or getting onto their email list will typically allow you to collect free meals, discounts and gift cards, making the reward that much tastier. This past Mother’s Day at Ruth’s Chris Steak House, moms were given a free $25 gift card; Baskin-Robbins hosted a cone-sampling day and gave away ice cream from 3-7 p.m.; at Macaroni Grill moms earned a $20 gift card for a future visit, and moms ate for free at Hooters (yes, Hooters) from a special menu.

Free Cone Day at Häagen-Dazs, May

Haagen-Dazs serves customers with one free mini cone at their stores for four hours in the early evening at this annual event. (Dates vary.)

As the official sponsor of National Slider Day, White Castle typically offers folks one free slider and a small Coca-Cola Freestyle beverage to all Cravers who enter one of their nearly 400 Castles nationwide with a coupon from their website.

Krispy Kreme shoves one free and delicious doughnut into the doughnut holes of their customers on the first Friday in June to celebrate this diabetes-inducing annual event. In 2019, folks got to choose either an iconic Original Glazed Doughnut, a Chocolate Iced with Sprinkles, or a Glazed Raspberry-Filled Doughnut. (By the way, Krispy Kreme also gives away free doughnuts on Halloween to patrons in costume.) Not to be outdone, or out-dunked, Dunkin’ Donuts offered guests a free classic doughnut of their choice with the purchase of any beverage, all day long. National Doughnut Day 2020 is June 5. Stock up on insulin now.

On your next birthday you’ll likely be a little grayer, and maybe a little heavier, but wouldn’t it take the sting out of getting older if you were able to snag yourself free food, desserts and drinks from complete strangers? Of course, it would! Many restaurants will reward you with giveaways and special offers via email or text on your special day if you sign up for their e-clubs. Boston Market, Au Bon Pain, Chick-fil-A, Johnny Rockets, Ruby Tuesday, Jersey Mike’s, Denny’s, Hooters, Moe’s Southwest Grill, P.F. Chang’s, Red Lobster, IHOP and even Starbucks — the list is endless — will all give you free stuff on your birthday. It may turn out to be the best part of turning 40. Or 50.

July 9, 2019
Why A Solid Landing Page is Key to Effective PPC
Learning to Speak Like a Pro