Peter Cancro was just 17 when he bought the sandwich shop where he worked. Here’s how he turned it into the billion-dollar chain of franchises that Jersey Mike’s is today.

On a cold, clear night in March 1975, Peter Cancro knocked on his high school football coach’s front door in Point Pleasant Beach, N.J. It was just after 9 p.m. on a Sunday, but Cancro felt this couldn’t wait. He had to see Rod Smith.

Smith’s wife, Janet, opened the door and ushered Cancro into the living room, where the coach was seated in his favorite armchair. When Smith had heard his quarterback was coming over to talk on a Sunday, he thought Cancro must be in trouble. But Smith reserved judgment and simply listened.

Cancro explained he’d missed all his classes the past week because Mike’s Subs, a local sandwich shop where he’d worked for the past four years, was for sale for $125,000. Cancro wanted to be the one to buy it. Another buyer was ready to sign for the sub shop, Cancro explained fervently, and there was no time to lose. He opened a folder and laid out the business’s gross profits and earnings potential. After looking over the details, Smith, who was also a banker, sat back and looked his quarterback in the eye. “I think I can do something,” he said.

Smith loaned Cancro $125,000 with a seven-year payback plan to win out over the other buyers’ offers. Cancro left his coach’s house feeling like he couldn’t fail, and he kept his plan mostly to himself. The deal closed on March 31, 1975.

At 17, Cancro was officially a business owner. Now, he’s the founder and CEO of Jersey Mike’s Subs after he expanded that single mom-and-pop location to close to 1,400 franchises nationwide with more than $1 billion in annual sales. Jersey Mike’s is measured as the fastest-growing sandwich chain in the U.S., with more than 18 percent growth in sales year over year, according to industry research from Technomic. (Jersey Mike’s closest competitor in sales growth, Firehouse, boosted annual sales at less than 5 percent.) Nevertheless, after Cancro’s buyout, there were bumps in the road that he had to learn to navigate on his own. 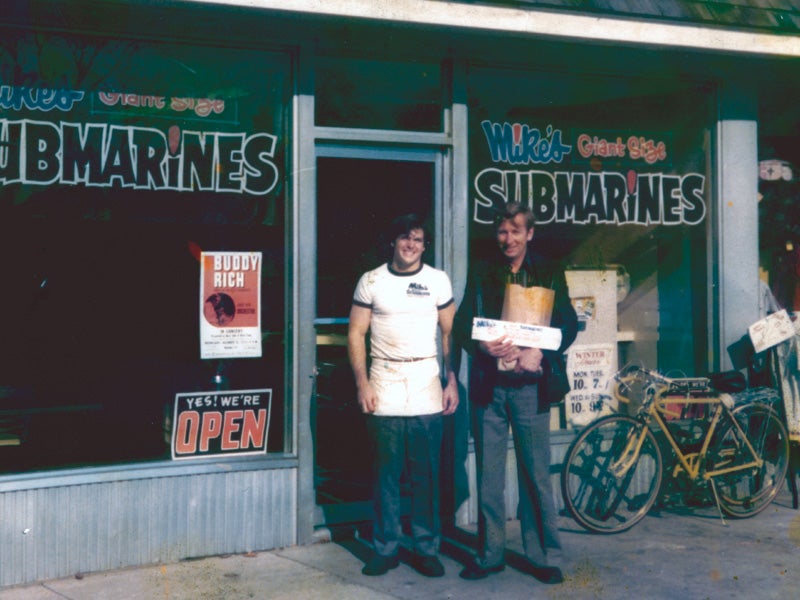 Going all in on an instinct

His senior year of high school, Cancro had the title of class president, a winning smile and hair akin to 1970s-era David Cassidy. He also had aspirations to study law at the University of North Carolina at Chapel Hill. But after the Mike’s Subs deal closed, Cancro’s priorities shifted. Working at the sub shop every day meant he skipped a lot of class during the three months leading up to graduation. He had enough credits to graduate, but he hadn’t realized that full participation in gym class was a requirement. He secured a medical excuse for skipping and graduated with his class — after driving up in the Mike’s Subs van.

Cancro started working at Mike’s Subs in 1971, when he was 14 years old. His brother John, who had worked there the summer before, inadvertently got him the job after the boss asked about Cancro. “I’m not sure how bright he is, but I know he’ll work hard,” his brother said. Cancro was hired. For the next four summers and winters, he greeted customers and slapped together sandwiches part time. The winters were quiet, but business exploded during summertime, when Cancro said Point Pleasant Beach’s population quadrupled. People came for the beach, but evidently, some stayed for the subs. The lines regularly snaked out the door.

In January 1975, the owners of Mike’s Subs, brothers Victor and Frank Merlo, put the shop on the market. Cancro’s mother told him one Sunday night — then, she blurted out, “Why don’t you buy it?” Cancro turned the corner and went up the stairs to bed. By the time he woke up Monday morning, he was a slave to instinct. He leapt out of bed, frantic, and skipped school to knock on doors and ask for loans. He had one contender who wanted to shore up the deal in exchange for a partnership, but Cancro didn’t want a partner. He wanted to do this on his own, and that’s why he sought out Rod Smith. 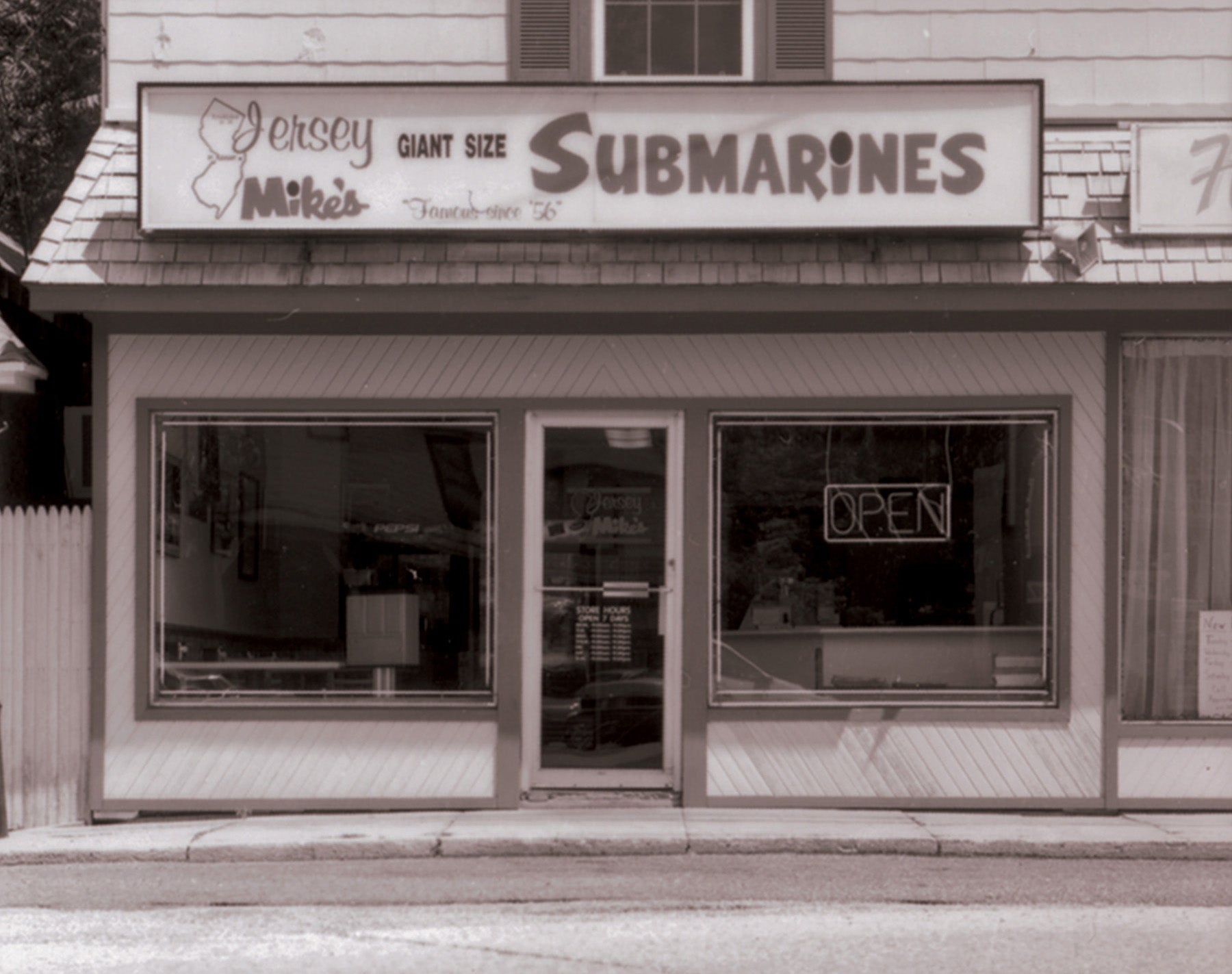 Coming back from the brink of bankruptcy

In the decade after he bought his beloved sub shop, Cancro opened up a few more local stores and paid off his loan to Smith (with interest). He opened the company up to franchising in 1987 and changed the name to Jersey Mike’s so that no matter where locations ended up, they wouldn’t lose sight of their roots. Year after year, the number of locations rose. By 1991, there were 30 stores spanning the Jersey Shore, East Tennessee and Cincinnati. Then, the 1990 recession hit the company hard.

“It still hasn’t left me,” Cancro says. The real estate market saw a deep decline. Banks were hit hard by the economic slump, which in turn made it difficult to borrow money. People couldn’t afford to take out loans, so Jersey Mike’s franchise growth slowed. And Cancro, who had invested almost all of his earnings into growing the business, had to lay off his six employees. He had no money in the bank to offset this kind of unforeseen event.

Cancro was in shock. For the next few months, he headed into his office every morning. Alone in the space, he thought, “What am I going to do now?”

“You show up every day, and that’s nine-tenths of success,” Cancro says. After heading into his office, he spent time with the owners of each Jersey Mike’s location to make sure everything was being done right. He used the lack of payroll obligations to pay the company’s bills, then directed his energy toward a huge marketing push: direct mail campaigns, door-to-door grassroots marketing one mile around each store, local radio appearances for store openings and slowly buying up billboard space.

Cancro had been near the brink of bankruptcy, but he skirted it and hired his first employee back six months after the layoffs. Within a three-year period, Cancro was able to hire everyone back. He doesn’t necessarily regret his lack of reserves, because reinvesting earnings into the business led to more consistent growth, but he does see how having them could have helped offset the unexpected. 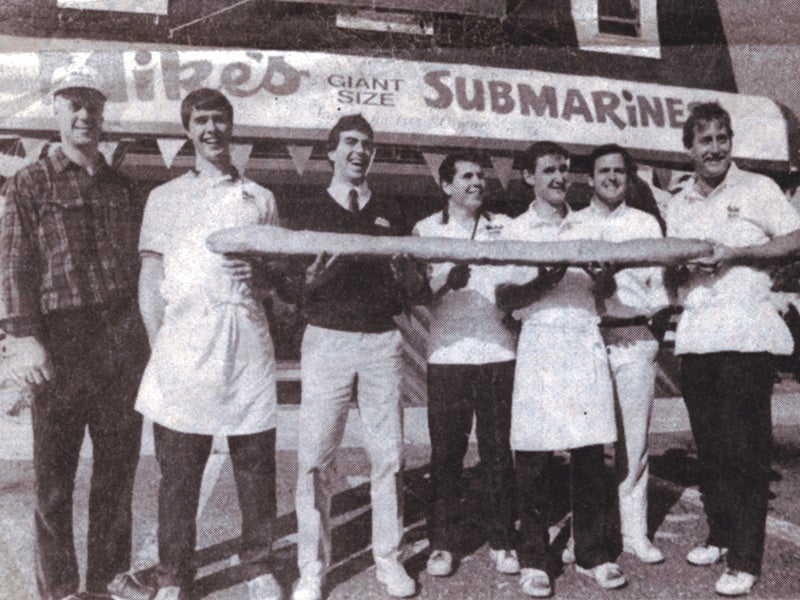 After 43 years of work, Jersey Mike’s plans to double its number of locations over the next five years. The current initial investment for a store costs between about $193,000 and $660,000, and franchisees need to be able to prove a net worth of $300,000 and at least $100,000 in liquid cash. Jersey Mike’s currently has locations in 45 states and territories, and growth has been relatively slow but steady.

“People always say, ‘Did you ever think you’d be here at this point in your life?’ and I say, ‘Honestly, I thought it would’ve been 15 years ago,'” he says. But Cancro does his best not to sweat the small stuff. If he were to change anything, he might spend more time planning for anything that could happen. “We were mostly reacting,” he says of the time leading up to the 1991 recession.

As for Cancro’s advice for entrepreneurs? “Show up early, stay late, make sure you’re lookin’ sharp [and] you’ve got great energy … and be genuine. Be real. Be yourself. Don’t try and pretend,” he says. “People can see through that in a heartbeat.” Plus, tell everyone you can about your goals — and don’t let age deter you from them.

May 21, 2018
From Messenger Bots to the Growth of ‘Gram, Social Media Examiner’s Annual Report Reveals Trends to Watch
This Entrepreneur Shares How She Built an Audience Without Advertising