In ‘Yellow Is Forbidden,’ we meet the entrepreneur who designed the fabulous yellow cape Rihanna wore to the Met Gala in 2015. You remember that, don’t you?

Eyes popped and jaws dropped on a spring evening in May 2015 when a slender young woman clad in shimmering yellow began what would be a fateful, if unsteady, walk along the red carpet at New York’s Metropolitan Museum Gala.

She was, of course, the pop star Rihanna, and the mega-wattage cape she trailed behind her was such a fashion statement, such an intricate piece of handwork — 100 percent covered in embroidery — that it weighed 50 pounds and required a three-man entourage just to haul it up the Met steps.

Related: 4 Marketing Ideas From the Fashion Industry Every Business Can Use

“It was a phenomenal piece,” says the New Zealand filmmaker Pietra BrettKelly, whose documentary film Yellow Is Forbidden premiered at the Tribeca Film Festival last weekend. The film’s subject is the Chinese designer behind Rihanna’s cape — Guo Pei (pronounced gwo pay), one of the world’s foremost fashion entrepreneurs, though one relatively unknown in the West.

Until Rihanna donned that gold cape, that is. “It was incredibly intricate, all handmade. It took hundreds of thousands of hours to create,” BrettKelley told Entrepreneur. The piece, originally made by Guo Pei in 2010, was loaned to Rihanna for the Met show China Through the Looking Glass. But, in spite of Rihanna’s worldwide fame, there was no guarantee that her request for the loan was a done deal.

For starters: Guo Pei had never heard of her. “Guo Pei wanted to meet Rihanna and see if she had the right personality and the presence and the soul — if she was the right person — to wear it,” the filmmaker said. “[Guo Pei] said she did. She said to me, ‘I made her queen. I sensed that presence and that regal-ness.’

Which meant Guo Pei would loan out the garment. Lucky Rihanna.

In a Q&A, edited for length, BrettKelley explained some of the drive and entrepreneurship that attracted her to Guo Pei as a subject. How did this girl, born into modest means to communist survivors of China’s Cultural Revolution, transform into an international superstar and win the “invited status” she can now flaunt, to the the overwhelmingly male and European Chambre Syndicale de la Haute Couture?

San Laurent … Dior … Givenchy … Armani … Those are the denizens of haute couture who invited her in. 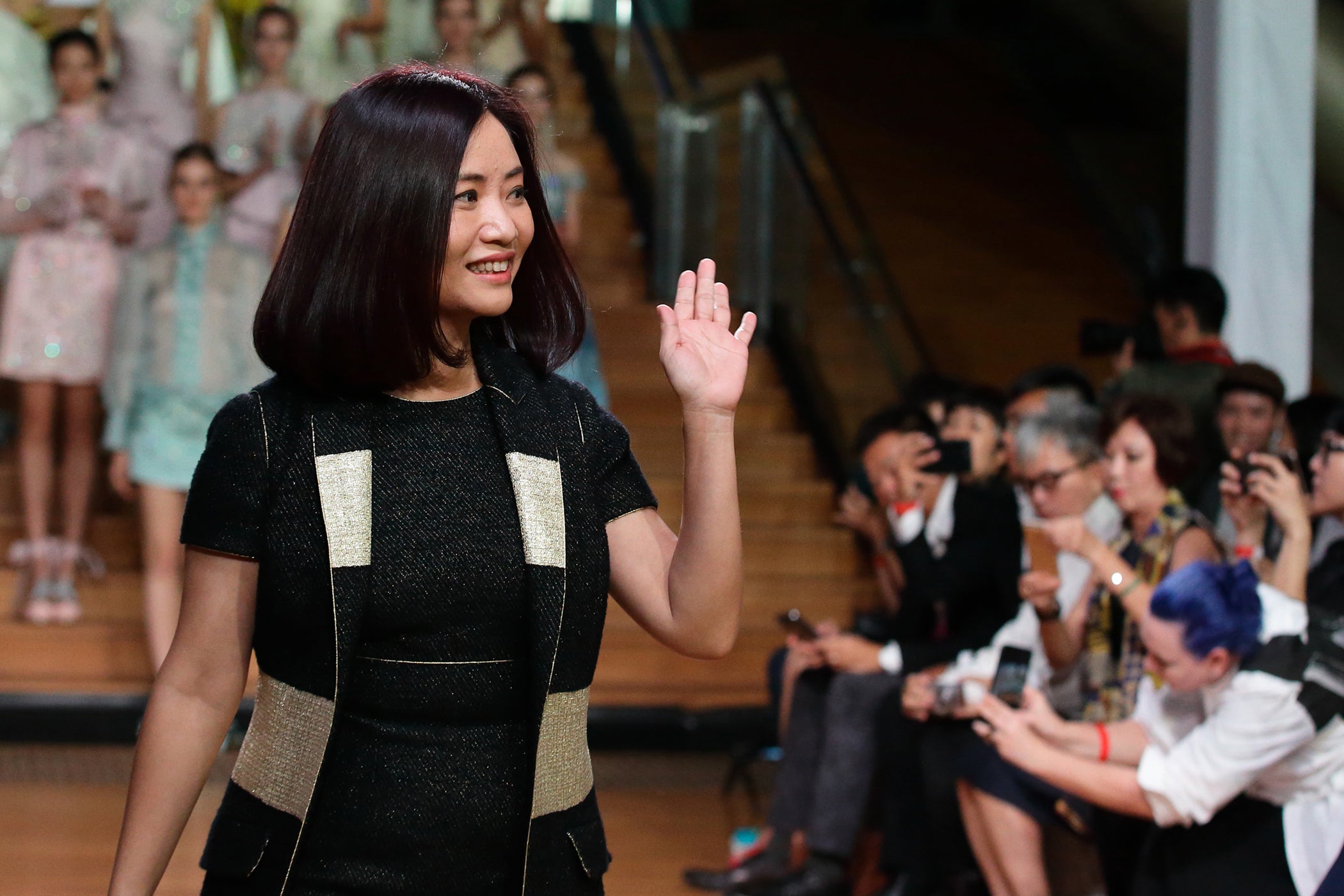 The film’s title refers to the difficult years of China’s Cultural Revolution, which Guo Pei’s parents — a batalion leader in the People’s Army, and her mother, a kindergarten teacher, whom we meet in the film — lived through. Please explain.

During the dynasties in China, yellow or gold was forbidden in China for commoners, for anyone beyond the royalty, the emperors. It was a color that was special to them, and only for them to wear, a dynastic color. During the Cultural Revolution, of course, no one was encouraged to wear anything bright or colorful; it was very drab clothing; and her parents and people of that generation still say you should not wear yellow; you should not be wearing gold. Her mother because of [partial blindness] doesn’t even know about the Rihanna dress, doesn’t know about a lot of Guo Pei’s designs, doesn’t know that she uses gold a lot.

In the film, we learn that Guo Pei won “invited member” status to Paris’s Haute Couture Council and was named to Time magazine’s “100 Most Influential People” in 2016. Why is the Council a big deal, and what exactly is haute couture?

It’s the pinnacle of fashion to fit into that group; it’s an enormous acknowledgement to get to that. That is in itself the prize; but for others with a big company, that is part of their marketing, their placement within the fashion world, to say they are haute couture [a phrase that in France legally may be used only by the elite in fashion who are admitted to the Council].

Somebody said you only make money in fashion from perfumes, handbags, scarves; so people are not making money through clothes. [Haute couture] clothes are generally not wearable, and because they are art forms, it’s a way for these labels and designers to get their name out there, and for people to regard them as being very special designers, and therefore to look at their other, more wearable, clothes.

These large companies — St. Laurent, Dior — use the haute couture side of the industry to put on these shows, but it’s just about making their name so exclusive, so special, so revered within fashion circles so the scarves and perfume handbags sell well.

There are rules around haute courture. So every designer that goes on that journey, and may never actually be admitted into the Council, which itself can take five years — must abide by all the rules. [The rules require that fashion creations be hand-sewn, that designers maintain an atelier and employees in Paris and put on a haute couture show twice a year.]

These are extraordinary shows. The one we followed [La Concierge in 2017] was around 2 million euros just for one show.

What were your impressions of the haute couture world itself?

The world of fashion is savage, it’s very cutthroat. It requires a huge amount of focus, dedication and output. It seems that most of the houses have one main designer, but [Guo Pei’s is] not a huge company; it’s just her, so she does it quite differently. Still, there’s the expectation that [haute couture] designers will deliver something new and different. In addition to the shows twice a year that they have to put out, they create other lines as well, like ready-to-wear and demi couture. It’s ruthless; you have to design and put out and remain marketable.

That’s where Guo Pei isn’t following the line. She isn’t interested in ready-to-wear [design] or having stores around the world with her name on them, or selling off the rack.

What drew you to Guo Pei as a topic?

I had just completed a previous film which I’d filmed in Afghanistan for two-and-a half years and I was interested in going back to a female story. I had read about Guo Pei a few years ago … and she really interested me, not as a fashion designer, but to use a phrase, because I’m interested in different tribes and had read about Guo Pei years ago and the shoes she creates [featuring characters embroidered into the shoes to tell a story].

When I saw the Rihanna story, and she said she “didn’t know who Rihanna was,” I thought that was really interesting because, coming from New Zealand, there is real isolation. I am drawn to other people who are isolated and I thought it was interesting that she was clearly very successful in China, but she knew very little about the world outside China. That is an aspect of all the characters in all my films; and so the loss for Guo Pei was the loss of her culture, of the art of embroidery that she has been working to bring back.

The amazing embroidery in her dresses is part of her entrepreneurial story. So are her negotiations with her 500 skilled craftspeople at the factories she calls her studios, outside Beijing.

That was where the dynasty people would go to spend the summer, to live up in the mountains where it was cooler. And when they went there, they would need a whole new set of clothing. The embroiderers were known for being particularly extraordinary; Guo Pei has changed history because, during the Cultural Revolution, that skill was stopped, so people in the area lost the skill of embroidery; and now that she’s brought it back, there’s even a woman in her studio whose great grandmother was one of the embroiderers in the last dynasty.

In the scene at the factory, there’s tension between Guo Pei and the manager. What was going on?

To make some money to support her haute couture work, she needed to go into more production-line clothing with regards to Chinese wedding dresses. She was trying to get the manager of the studio to try to work with her to make more production line garments so she could sell more and fund her work.

It was all part of this ongoing struggle she has that unlike the other haute couture houses around the world, she’s not making scarves, perfume and handbags. And one of her big things is to encourage the use of Chinese wedding dresses rather than big white European wedding dresses that have become popular. She was trying to say, “We need to get more production lines,”and the manager was saying, “That’s not how we do it here.”

Something about Guo Pei’s business model I found really fascinating was that people paid in advance; they became members — there was that scene with a VIP client who spent nearly a million dollars. [In Guo Pei’s business model], people pay in advance. She has about 500 clients who pay in advance to be in “the club,” to have designs made by her. It’s like a credit note you mark off And I found that fascinating.

Related: The Relevance of Fashion Shows for Retailers/Ecommerce Firms to Launch New Collections

Speaking of business models and raising money, that’s something that, as the creator of 50 films, and an entrepreneur yourself, you too have to engage in.

With documentary filmmaking, often the film is not the struggle. You’d think filming in Afghanistan [for her last film, A Flickering Truth] is a struggle; but, no, the struggle is the funding. So I applied to every grant, to every fund going internationally. I did crowdfunding [raising $20,000 (NZ), or $14,000 U.S.]